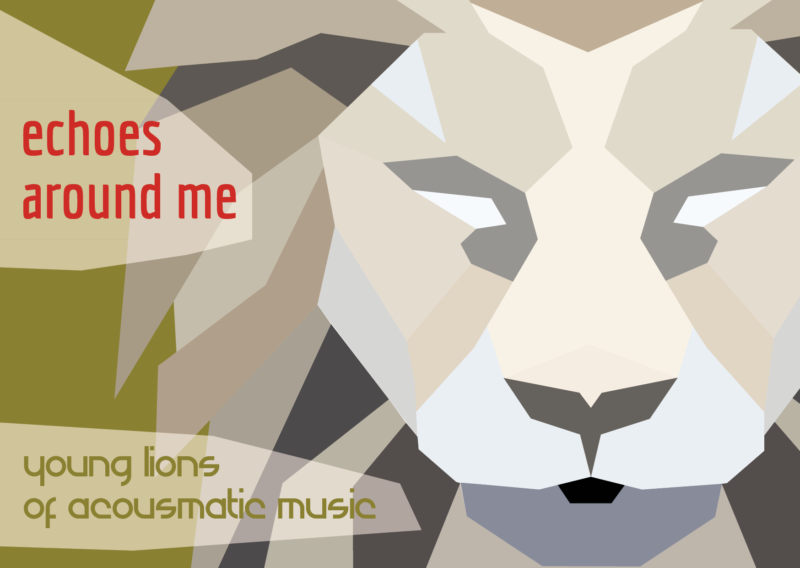 Young Lions of Acousmatic Music on The Vienna Acousminimum

Programm Echoes Around Me IV

In this track, you can hear an electro-acoustic arrangement of selected voice fragments from the famous Steve Jobs speech at Stanford University in 2005. The drums part was recorded by Mykhailo Birchenko using Roland SPD-SX and drums with triggers.

4-Channel piece. The source of all the sounds in this work is an air – wind and human breath recorded in Kyiv, Ukraine. From the very beginning of the work an attempt is made to build a tower from the air. However, as soon as a massive architectural structure appears after long tryings – the listener is finally surrounded on all sides by walls with low-frequency noise – it immediately dissipates in the air like an illusion.

Following the idea of sonority as a temporary ubiquitous experience, this set will focus on continuous ecosystems, impulse and feedback. It will mainly question sound as a transitory but reappearing element.

This project is an opportunity to talk and reflect on faith, religion and memory both on a more personal level and on a cultural level, to some extent. This is the process of rethinking/redefining and de(re)constructing the Church chants of the „Cherubic song“ by dissecting the magnetic tape.
This is a long and multi-level reassembly process. I found recordings of various chants of the „Cherubic song“ and removed all the narrative — the verbal component – from them. Then these segments were recorded on tape, which was cut into multiple parts. These pieces in random order and position were glued back together into a single tape. And recorded again. After that, I dissected the recording in digital form.
During the process of working on this project, I invited people to join the performative meditative part of cutting and glueing the tape. Join a conversation, reflection, not necessarily about religion directly, but about experience, choice, and memory.

The quadraphonic installation “C.R.N.S.” [Communication by Radio Number Stations] is the result of working with recordings of numbered radio stations (the range of radio waves with a frequency of 3 MHz to 30 MHz), which includes the processing of the recorded signal in real time.
Numbers stations are shortwave radio stations created and used by various special services to transmit data to spies, reconnaissance and other military agents in foreign countries. They broadcast encrypted messages in the form of groups of numbers or letters using computer- synthesized voice, voice of narrator, Morse code, or digital mode. While the encryption methods used by most numbers stations are unknown, many believe that in most cases a one-time code is used: mathematical addition of a set of random numbers (key) to plaintext, which can be used only once and should be destroyed after use.
In a broad sense, the project is dedicated to the topic of communication. In this case, communication is considered not as a dialogic interpersonal, but as a unidirectional process. Instead of subject-subject relations, subject-object relations appear, where the other side turns into a passive object of influence.
In accordance with the Linear (classical) communication model of G. Lasswell (1948) and the Noise communication model of C. Shannon – W. Weaver (1949), this project can be characterized as a representation in musical of a linear and unidirectional communication process in which feedback is absent and not considered.
According to J. Derrida, communication cannot be completely pure and successful, without distorting the perception of truth, nor can there be truth without lies and error. But in this case, we have a signal that can be decoded in the only possible way (i.e. there is no possibility of distorting the semantic aspect of signal perception). At the same time, we cannot claim to reveal the meaning of the message.
Thus, the project proposes to be in the space of unambiguous signals from various numbered radio stations (active and already discontinued), raising the question of the ambiguity of interpretation, perception and understanding of the communication process as such. It also gives everyone the opportunity to become the “unknown” (that is, perceiving) in this “equation” of communication and to carry out their own decoding of messages.

Yevhenii Dubovyk (1996) | Was born in Ukraine, Pryluky, Chernihiv region. Now lives in Kyiv. Graduated from Chernihiv Levko Revutsky Music College in 2015 (Variety of Stage department – jazz piano). Studies music composition at the Tchaikovsky National Music Academy of Ukraine from 2015 to present in the class of Ivan Taranenko. Also, takes lessons from Alla Zagaykevych (electroacoustic music). Composer of the chamber, electroacoustic, jazz music and pieces for piano. Participant of the Masterclasses during the Sounds Around Me Festival as a listener (Vienna).

Paul Gründorfer | Artistic work in the scope of conceptual and process art, site specific intervention, sound sculpture, performances. He is currently working on installations and interventions that deal with functional methods and question the spatial conditions. He develops process-related test structures and examines variable or unstable systems for their perceptibility and reception.
Visit Website of Paul Gründorfer

Angie Lau | „And now we‘re going to break all his bones!“ We jump onto the wooden box: „Bam!“ Stop, Rewind and Play. And there it was: the unlimited world of sound. Which has not let go of me since then.
Born in Bregenz, Austria. After several stations: adopted home of Vienna. Training as a sound engineer and media designer. Focus on the interpretation of acousmatic pieces and spatialisation of live electronics.

Olga Zubova is a sound and visual artist, performer, and an art historian. Works in various mediums, including sound, performance, video, and installations. In her projects, she investigates human self-representation in different realities, and draws on a speculative or parafictional approach, creating alternative scenarios of the world.
Born in Siberia, she now lives and works between Moscow and St.Petersburg, Russia. She holds a BA in Liberal Arts and Sciences with a major in Art History from Smolny College, SPBU and Bard College, NY. In 2019 she studied in New Stage Media Lab, Aleksandrinsky Theatre, St.
Petersburg. Currently she is obtaining her MFA in Sound Art&Sound Studies in HSE Art and design School, Moscow, Russia. Olga’s projects were presented in various exhibitions and festivals around Russia, Finland, US, and Austria.
Member of art-collective iBiom. Co-host of a podcast about culture, art and ethics Kunstuck.
Visit Website of Olga Zubova

Victoria Morgunova — media artist, musician.
Born in 1995 in Tver, where she graduated with honours from the school of art at the Tver College of culture named after N. A. Lvov. In 2012 she moved to Saint Petersburg, where she attended Pavlov First State Medical University of St. Petersburg. Since 2015 she studies and researches psychology at Saint Petersburg State University. Since 2016 she studies painting under the guidance of A. S. Zaslavsky, participates in exhibitions of contemporary art in St. Petersburg, and since 2017 engaged in electronic experimental music.
Areas of activity and interests: sound art, sound poetry, radio art, experimental electronic music, multichannel installations.
Victoria’s works are closely related to the poetization and verbalisation of sound, the semantics of sound and radio poetry at the junction with modern radical electronic music.
Visit Website of Victoria Morgunova