Echoes Around Me 2022 – Register here 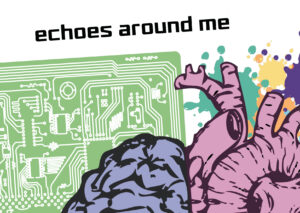 Even more loudspeakers, even more music and even more artists …
Merged with the Brussels Acousmonium, the Vienna Acousmonium plays the most brilliant installation ever in Vienna with a full line-up of 64 loudspeakers. During the preparatory week, Alla Zagaykevych (Ukraine) and Jamie Reis (Portugal) will teach the methods of acousmatic composition and Annette Vande Gorne (Brussels) will teach how to play the Acousmonium. In addition, the works of the winners of the first Austrian competition for acousmatic music under 30 years of age – ‘Young Lion*ess of acousmatic music’ – will be premiered.

Open for everyone
Send an e-mail to get the schedule

The different types of interfaces – listening, analysis and attribution of works to be worked on by the trainees – “Espace Escape” by Francis Dhomont & “Figures d’Espace” by Annette Vande Gorne – notations & acousmographs – the four main spatial categories – spatial interpretation – stylistics – figuralism – multiphonics – The Spatializer as a new profession in acousmatic music

Annette Vande Gorne (born 1946 in Charleroi, Belgium) is a Belgian composer of acousmatic music. She stud at the Paris Conservatoire with Pierre Schaeffer and Guy Reibel. She founded the Association de Musiques et Recherches and the Métamorphoses d’Orphée studios in Ohain, Belgium. Annette Vande Gorne has also created a concert series and an acousmatic festival called L’Espace du son in Brussels since 1984. Since 1986 she has taught at leading music conservatories in Liège, Brussels and Mons, Belgium. At the Royal Conservatory of Mons, she founded an electroacoustic department with 14 teachers.
_____

Possible combinations of instruments in works – Violin, Cello, Flute (solo) with electronics
Duration – up to 10 minutes.

– The relationship between instrumental and electroacoustic composition in the context of modern musical thought.
– Analysis of the work concept and determination of the morphological and syntactic components of the work.
– Spectral analysis and its role in the composition – Analysis of the musical material and perspectives of the structural development of the work.
– Inclusion of the technical means of sound synthesis
– Completion of the score
– creation of a technical flow: of the performance, of the rehearsal process, of the methods of synchronization of the instrumental and electroacoustic parts

Alla Zagaykevych (born 1966 in Khmelnytskyi, Ukraine) is a Ukrainian contemporary classical music composer, performance artist, cultural manager and musicologist. From 1995 to 1996 she attended the annual course in composition and music informatics at the Institut IRCAM (Paris). In 1998 she became a lecturer at the Department of Composition and Music Informatics of the National Academy of Music of Ukraine in Kiev, where she founded the Studio of Electroacoustic Music. Alla Zagaykevych is the artistic director of international projects for electroacoustic music in Kiev: “Electroacoustics” (since 2003), “EM-VISIA” (since 2005). Since 2010, she has been the director of the Electroacoustic Music Association at the National Union of Composers of Ukraine and winner of the international competition Musica Nova (2011).

This master class addresses space as a parameter in acousmatic music, as well as the occurrence of the most important phenomena associated with it. Furthermore the acousmatic composition methods and their relation to the musical gesture as first formulated by Annette Vande Gorne will be presented.

Jaime Reis (born 1983, Lisbon, Portugal) is a Portuguese composer. During his studying, attended seminars with Karlheinz Stockhausen and worked with Emmanuel Nunes. His music has been presented over more than 20 countries, both instrumental and electroacoustic. He has collaborated with institutions and ensembles such as IRCAM, KCMD, Musik Fabrik, ZKM, Aleph Guitar Quartet Musiques & Recherches. Since 2003 Jaime Reis is an artistic director of the DME Festival – Electroacoustic Music Days (having 60 editions). Now, he’s Professor in the Superior School of Applied Arts Castelo Branco, Portugal and in the Superior Music School of Lisbon. Director of art space “Lisboa Incomum”.

You can pre-order tickets: Please send us an e-mail.